Ethiopia, the oldest independent nation in Africa, is a country of endless diversity and heritage, among this endless diversity and heritage, the historical sites of Ethiopia is one of the prominent and major tourist attraction areas which encompass the ancient capital of Ethiopia; such as Yeha, Axum, Lalibela, Bahir Dar, Gondar, as well as Tigrai region. 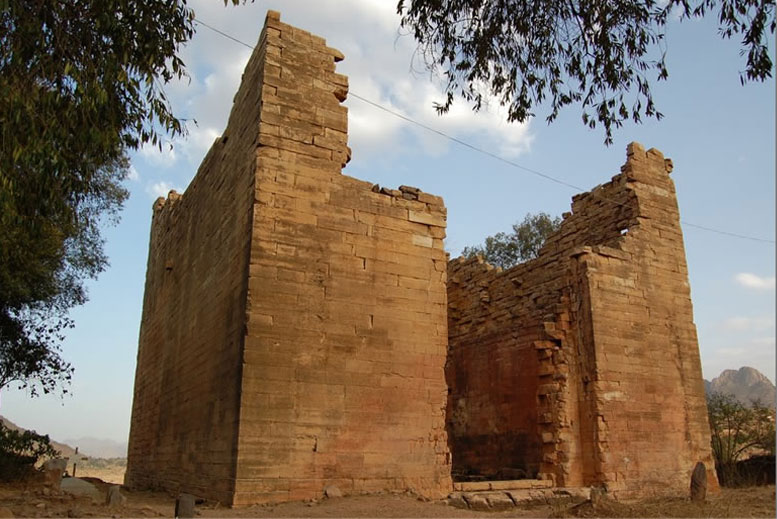 Ethiopia’s earliest, Pre-Axumite known capital, situated at less than two hours’ drive from Axum through some dramatic highland scenery. As the birthplace of the country’s earliest high civilization, it is well worth visiting. The ruins of this large, Pre-Christian temple, erected around the fifth century BC, consist of a single roofless oblong chamber 20meters (66 feet) along by 15 meters (50 feet) wide. The windowless 10 meters high walls are built of smoothly polished stones, some of them more than 3meters long, carefully placed one atop the other without the use of mortar. 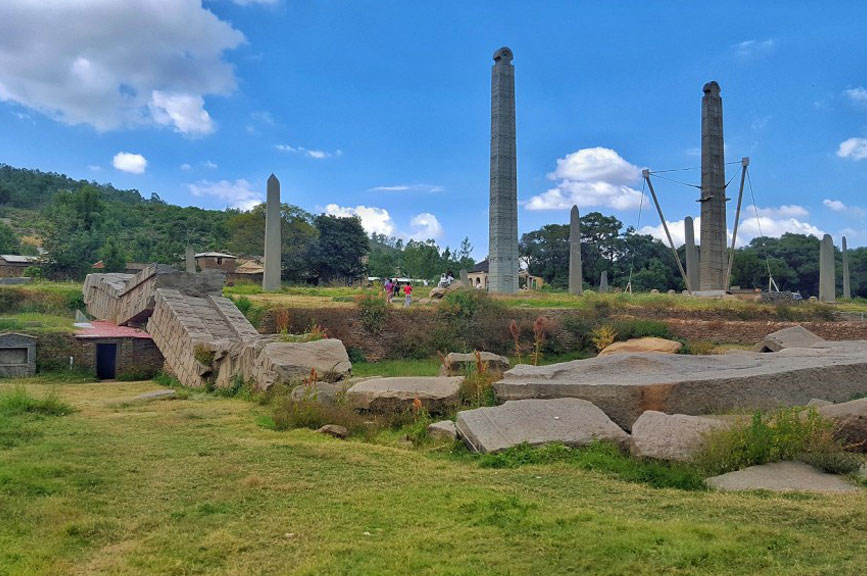 Ethiopia’s, most ancient city and the capital of the Axumite state, which was founded about 1000BC, is the site of many remarkable monolithic stone stelae, or obelisks. The three most important being decorated to represent multi storied building, complete with doors and windows. The largest obelisk, which was 35 meters long and weighed 500 tons, is the biggest piece of stone ever cut by humanity anywhere in the world but today it lies broken on the ground. Near it stands a smaller but nevertheless most impressive 24 meter high obelisk, the pride of Ethiopia. A somewhat larger obelisk was taken to Rome, on the order of the Italian warrior Bento Mussolini in 1937, but it is returned to its homeland and being erected on August 2008.

Axum, in its day, was a great commercial center, issuing its own currency and trading with Egypt, Arabia, Persia, India and even Ceylon. The settlement was also the site of Ethiopian’s oldest church, which dates back to the coming of Christianity as the state religion, early in the 4th Century. The original building has long since disappeared but a structure erected on it site by Emperor Fasildas in the early 17th century is still there. A nearby outhouse is the reputed repository of the biblical Ark of the Covenant, however except one guardian (priest) no one is allowed to enter in to the sanctuary. 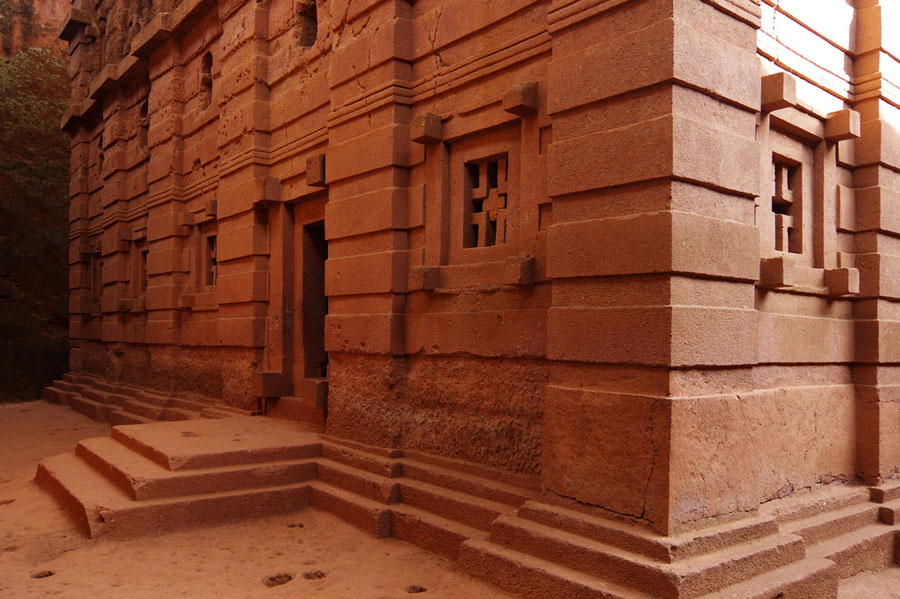 This medieval city, which was briefly become the capital city of Ethiopia after the fallen down of the Axumite kingdom in the 10th Century. Lalibela, a medieval settlement, is the site of eleven rock hewn churches believed to have been built in the late 12th and early 13th century by one of its king called Lalibela. These remarkable edifices, which were carved inside and outside of solid rock, are of eighth ranked among the wonders of the world. Each building is architecturally unique, all are finely carved and several are decorated with beautiful paintings that remain well preserved. A visit to this ancient setting is particularly worthwhile during the colorful Ethiopian Christmas on January 7 and Epiphany in January 19, just two weeks after the Christmas.

Located north of Lake Tana, which was the capital city of Ethiopia during 17th and 18th century and home for a number of emperors and warlords who built the oldest and the most impressive several castles and palaces around the area which is reflect the Gondrian structure built of a roughly hewn brown basalt stone held together with mortar, the open air bath of king Fasiladas, now baptismal place during the Ethiopian Epiphany, at January 19th, the ruined palace of empress Mintewab where the Scottish explorer James Bruce reside for sometime and the famous church of Debre Birhan Selassie (Light of Trinity) with its wonderful murals. 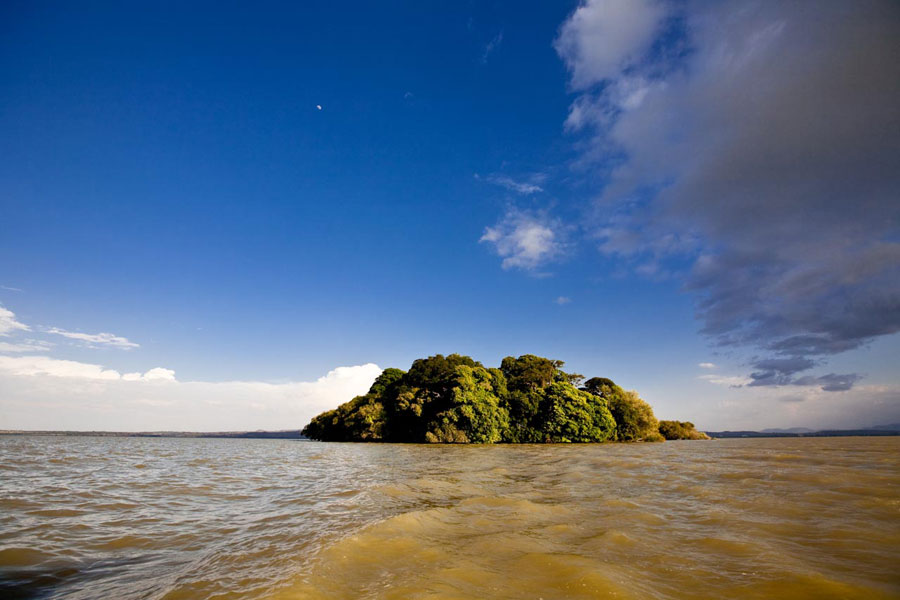 Bahir Dar located on the southern shores of Lake Tana, the largest lake in Ethiopia and the source of Blue Nile River is a center for boating excursion to the lake’s islands and Blue Nile falls, the most spectacular waterfalls. There are 31 islands that are dotted on the lake; those are the home for the most interesting island churches and monasteries including the monasteries of Kibran Gebriel, Ura Kidane Mihret, Azwa Mariam, Dega Estifanose, Tana Cherkos, and Narga Sellasie . . . and more are among the monasteries inhabited the island of Lake Tana and also a Boat Cruise on Lake Tana is one of the most scenic and mind blowing excursion for visitors. A spectacular Blue Nile falls or Tis Issat, meaning, “Water that Smoke” is located 32km from the town of Bahir Dar. The Blue Nile Falls plunges 45m below and 400m wide giving rise to steam cloud, smoke like fire, which is locally known as Tis Issat. 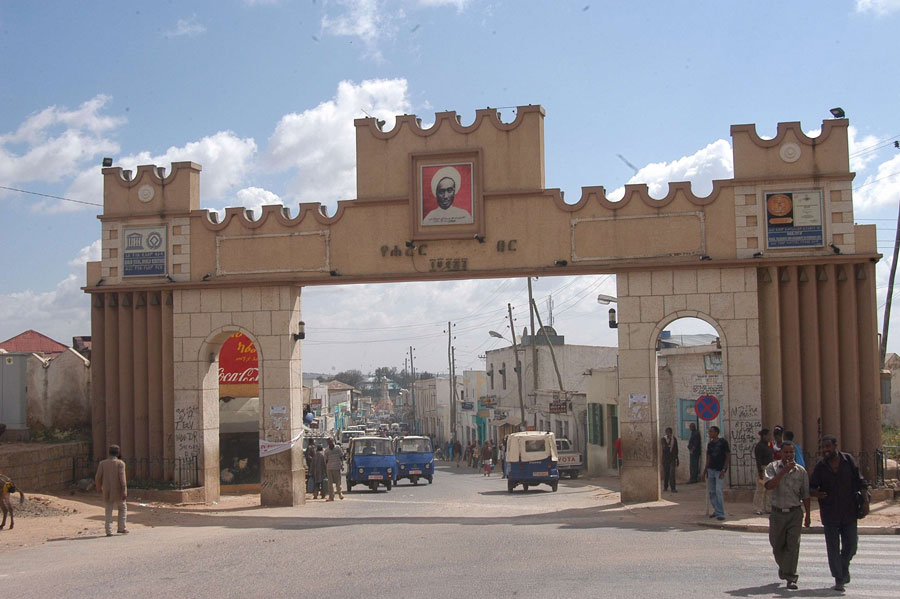 Ethiopia’s historic route does not end at Addis Ababa, it continue some  535 km to the east of the capital, perched at the end of a spur projecting from the central plateau, to the old romantic walled city of Harar stands amid green mountains on the eastern wall of the Great Rift Valley near the Somalian border, the historical city dating back to medieval time.

Harar, the holy Muslim city with its 99 mosques, regarded as the fourth holiest city after Jerusalem, Mecca and Medina, has been one of the major centers of trade and Islamic learning in the horn of Africa and also famous for its ancient buildings, great city walls, the 19th century French Poet Rimbaud’s house; who lived and treaded in the city and the Hyena man performance every evening outside the gates, while he feed the hyenas by using his mouth. Through centuries of its existence, the city has developed high quality craft industry such as basketry, colorful woven cloths, silver wear and ancient books binding . . . and others.

The Wukro Degum road leads west to Gheralta, its rock crowned peak, together with far reaching plains, enclosed by a chain of mountains, casts a panoramic view. George Gerster, the Swiss photographer, writes in his book, Churches in Rock,...

END_OF_DOCUMENT_TOKEN_TO_BE_REPLACED

Atsbi Wonberta is located east of Wukro and bears the churches of Mikael Barka, Debreselam Mikael and Mikael Imba. These splendidly executed edifices are found perched on a mountain commanding a view of their surroundings. Mikael Barka Mikael...

END_OF_DOCUMENT_TOKEN_TO_BE_REPLACED

The only sizable town between Adigrat and Mekelle, with its relaxed if rather nondescript character and forms a convenient base from which to explore the under list as well as other a number of rock hewn churches. There are major rock hewn...

END_OF_DOCUMENT_TOKEN_TO_BE_REPLACED

Along the Mekelle – Adigrat road, 25km after Wukro, an escarpment better known as Tsada Imba, meaning White Mountain, accompanies the road along the route to Sinkata. The rocky but scenic area is the home of one of the highly sacred places in...

END_OF_DOCUMENT_TOKEN_TO_BE_REPLACED

The monastery of Debre Damo is notable for its 6th century Axumite stone church, as well as for its impregnable cliff top position. This isolated relic lay on a 2800m high amba (flat topped hill) covering an area of 0.5m2 and sheer cliffs. The...

END_OF_DOCUMENT_TOKEN_TO_BE_REPLACED

Gunda Gundo is accessed from the town of Edagahamus, 100km after Mekelle. It has an area that lay between a sheer side cliff in the west and an escarpment that drops towards the Afar depression. From this settlement, a 24km rough road leads to...

END_OF_DOCUMENT_TOKEN_TO_BE_REPLACED 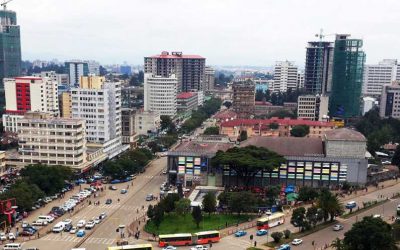 With the population of more than four million people, Addis Ababa is not only the political capital but also the economic and social nerve center of Ethiopia and also the seat of the Africa Union (AU), the United Nations Economic Commission for Africa (ECA), major Regional headquarters, more than 90 embassies and consulates.

END_OF_DOCUMENT_TOKEN_TO_BE_REPLACED 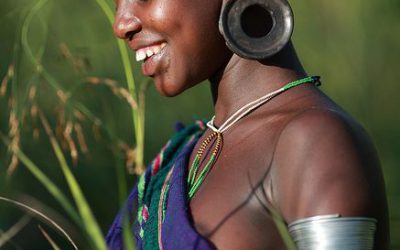 This stunning church often referred as Abune Abraham, after the monk who founded it, Debre Tsion is a church entirely hewn from a living rock. It is rectangular in shape, 12.9m deep, 7.7m wide and 7.6m high. Its ceiling is supported by six cruciform pillars and its three sides are surrounded by a cloister.